A Rare Conglomeration of Geese 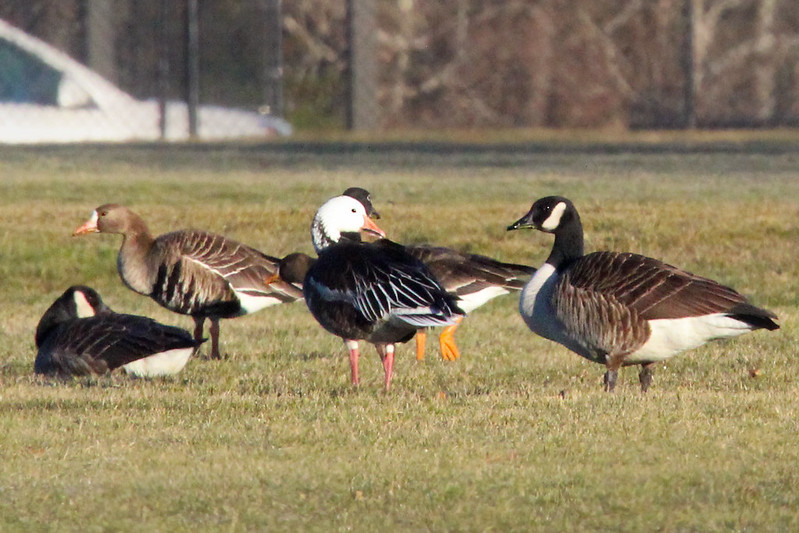 2 Greater White-fronted Geese, 2 Snow Geese, and 2 Canada Geese all foraging together on a local ballfield. Both Greater White-fronted Geese and Snow Geese are rarities here on Cape Cod, so to get such an unusual conglomeration of all 3 Goose species was quite the treat the other morning. Canada Geese are common year-round birds here…Snow Geese, while unusual on Cape Cod, are not completely unheard of…White-fronted Geese, however, are very rare for this area. I didn’t approach the Geese too closely, because I didn’t wan’t to scare them away, so photographs were distant…but this rare grouping of birds was still fun to capture. 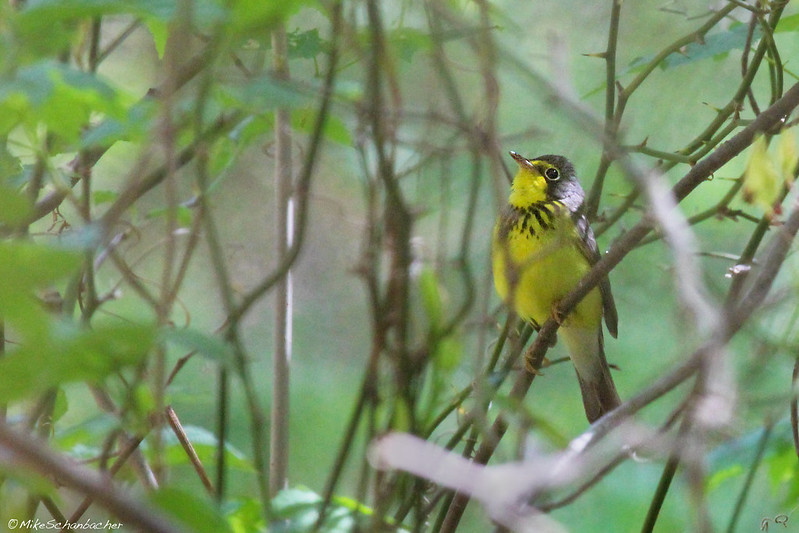 This lovely Canada Warbler had the lucky distinction of being my 400th life bird! I was lucky to get some looks at this awesome bird the other morning…he was one of the last few warblers I hadn’t seen yet.  I’m not sure how long it will take before I reach 500, but this milestone feels great…I can’t wait to see more! 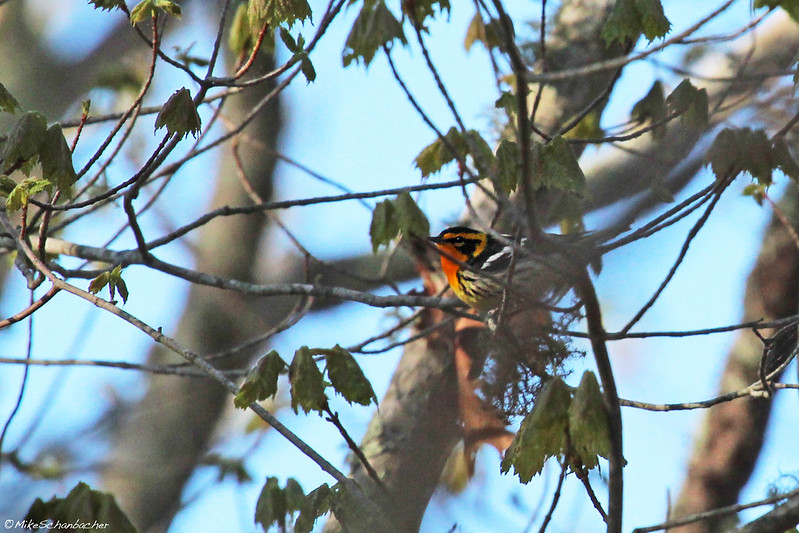 This beautiful male Blackburnian Warbler was a very special life bird #399 for me and my wife this morning.  They are very tough to come by on Cape Cod, so we were very lucky to get a glimpse of this little gem.  It wasn’t an amazing photo opportunity, but I was still able to snag a pic before he flew away.  This bird was definitely on my target list, and I was super happy to check him off, finally! 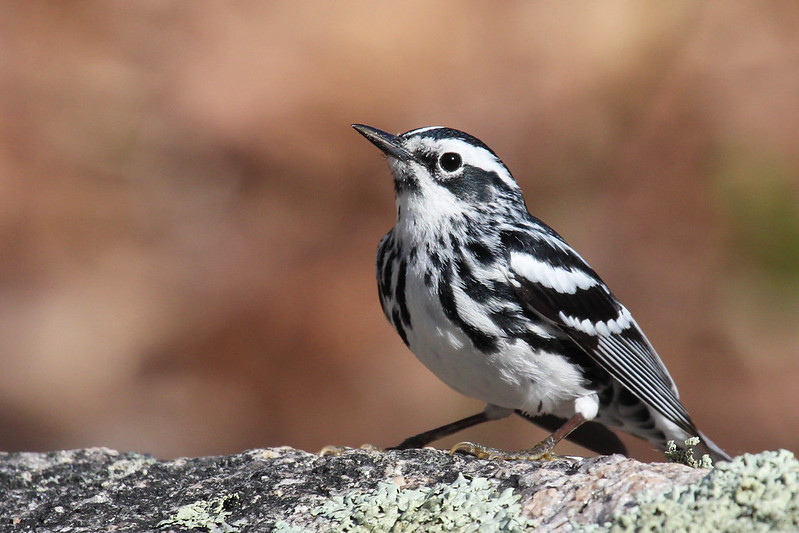 The spring warblers are coming through and this black-and-white was eager to show himself off. I got a terrific photo opportunity with this beautiful warbler in some great morning light, and it was happy to pose for me. I wish every bird confrontation were this ideal! 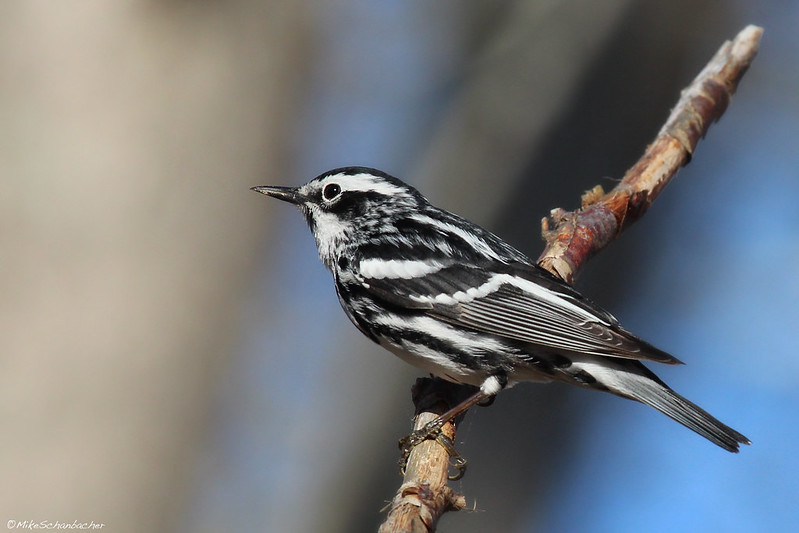 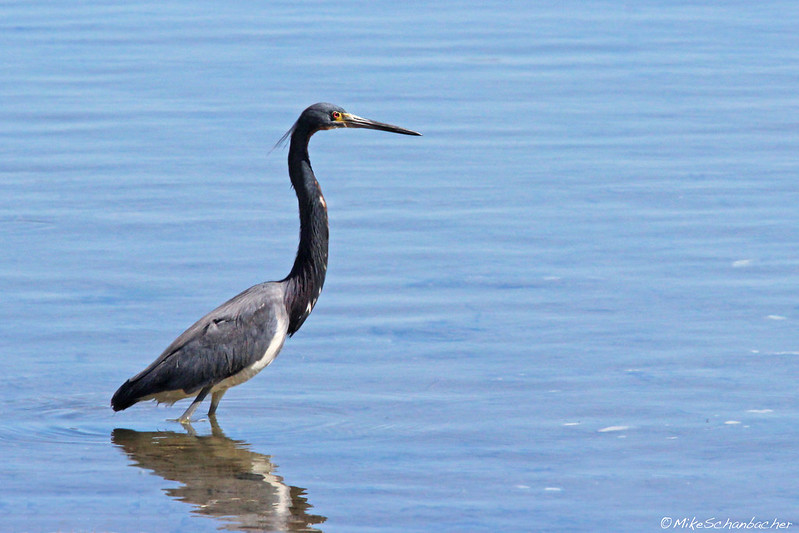 In their normal range, Tricolored Herons aren’t all that uncommon, but here in Massachusetts, they are tough to come by…there may be one, or two appearances a year during migration season. I have seen Tricolored Herons before in Florida, so this wasn’t a life bird, but it was a new state bird for me. As their name suggests, Tricolored Herons are multicolored in shades of blue, white, and red. Fortunately, this heron decided to make a stop in a marsh very close to where I live, so I didn’t have to go far to catch a glimpse and get some pictures! 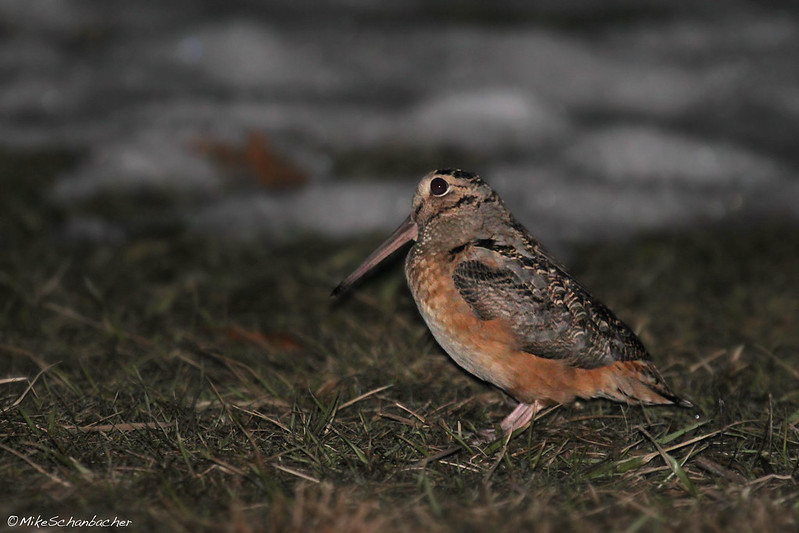 American Woodcocks are strange, secretive birds. The males come out at dusk in springtime to sing and dance for the ladies..They bob up and down, fly around, and make loud, nasal “peeent!” noises. I photographed this one at the edge of the local Walmart parking lot of all places. It’s an odd location to see such an interesting bird, but it lies adjacent to their preferred wet, swampy habitat. The ambient light from the parking lot let me get close enough to get a snap of this one. 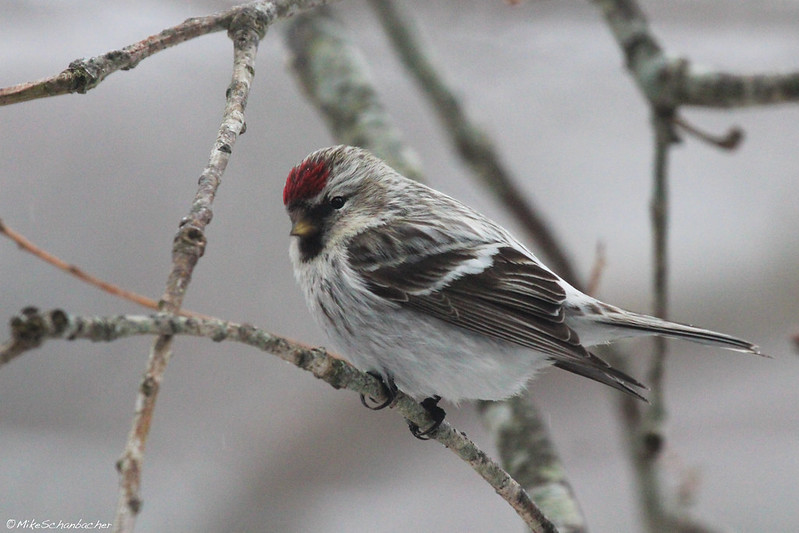 Hoary Redpoll – Woods Hole, MA – 3/21/15
A very rare bird for these parts, Hoary Redpolls breed on the Arctic tundra, and generally live in northern Canada in small numbers among flocks of Common Redpolls. They are distinguished from Common Redpolls by the lack of streaking under the tail, minimal streaking on the flanks, a pale, frosty overall color, and a short, stubby bill. This one showed up at my feeder in Woods Hole last week for a couple days and was life bird #397 for me! What a treat!

Peregrine Falcon At The MBL In Woods Hole 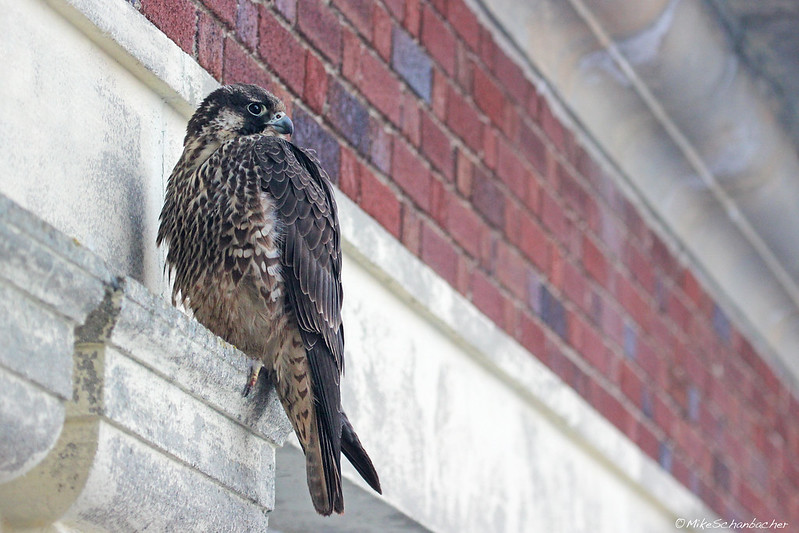 Peregrine Falcons are the fastest birds in the world…they have been clocked at 175 mph! This Peregrine Falcon has been hanging out on the MBL Lille Building in Woods Hole. Tall buildings are perfect artificial cliff faces for Falcons to dive from, so they often set up shop on these high ledges. In serendipitous fashion, this building is right across the street from a statue dedicated to Rachel Carson, the woman responsible for helping to ban DDT…the pesticide which put Peregrine Falcon’s on the endangered species list. Perhaps this Falcon wishes to give thanks to Carson for saving its life! Maybe it wants to learn some science at the MBL…or maybe this is just an awesome spot from which to hunt!

We saw many new birds during our 2 day layover in Hawaii. A highlight for me was the Red-crested Cardinal…similar in shape and size to other Cardinals, but colored with a much brighter shade of red. What a beauty! 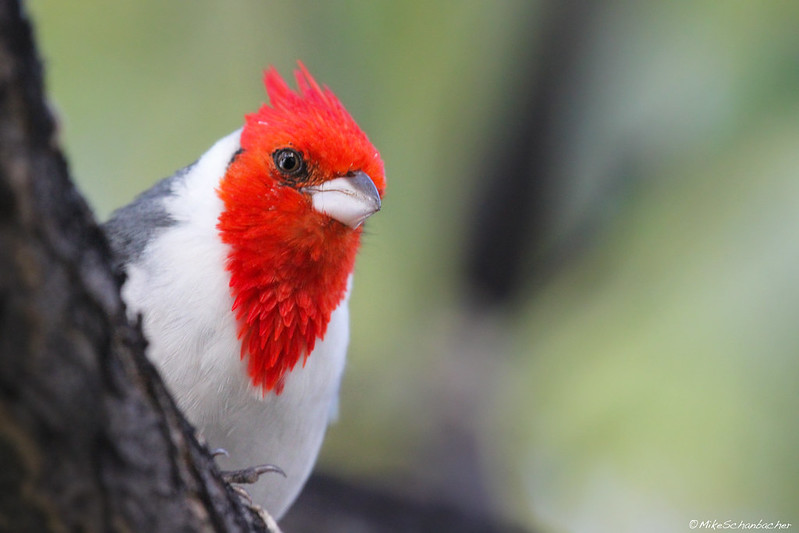 The Morepork, also known as the Tasmanian Spotted Owl, Boobook, or ruru, is the only remaining native owl species in New Zealand. 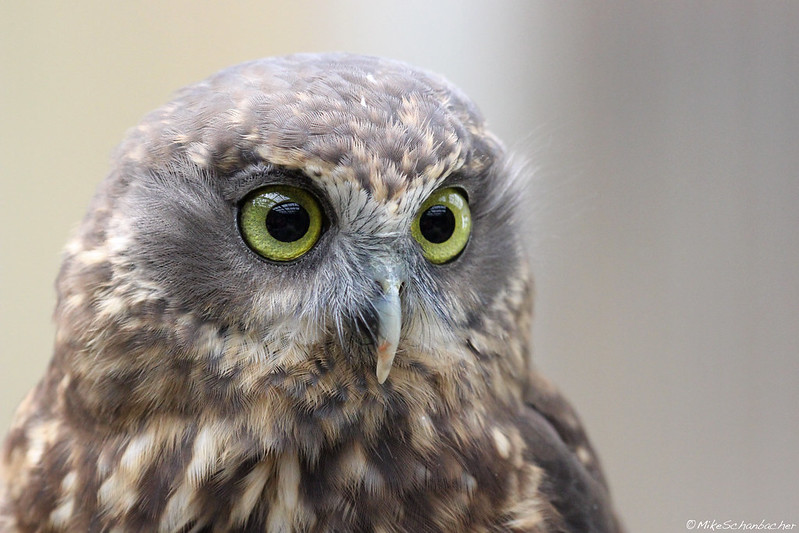 The Swamp Harrier, also known as the Australasian harrier, or kāhu, is the only native hawk species in New Zealand. 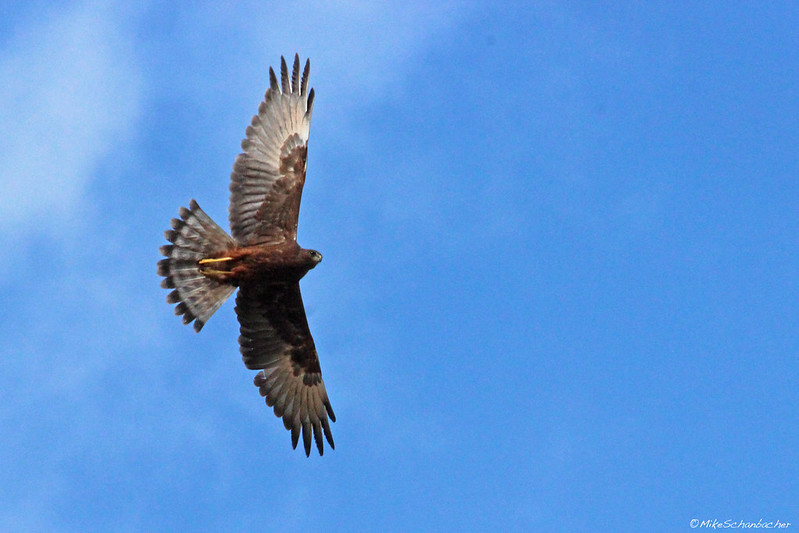 The New Zealand falcon, also known as kārearea, is the only remaining bird of prey endemic to New Zealand. 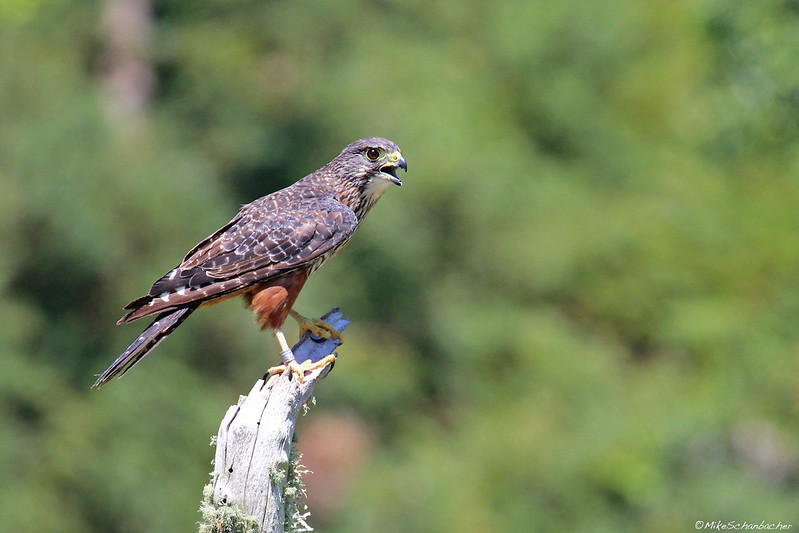